Virat Kohli and Anushka Sharma’s wedding has been long in the pipeline, but little did anyone imagine that the this milestone in the couple’s life would literally break the internet into a billion pieces. With photos of the ceremony having surfaced already, a video has now come out, showing Virat singing adorably for her lady love.

The couple’s journey has been nothing short of a fairy tale. They first got to interact with each other on the sets of a dandruff shampoo advertisement, and that marked the beginning of it all. With arguably the best batsman on one side, and one of Bollywood’s leading ladies on the other, Pakistanis were thrilled at the coming together of two of their biggest passions.

The two were rumored to have sadly called their relationship off last year, when it emerged that Virat had proposed to Anushka on New Year’s day last year, only for the proposal to be rejected, but that wasn’t exactly the case. Kohli, who was always believed to an eccentric, revealed that it was Anushka that made him more “sensible”, helping him to excel in both his career and life in general. 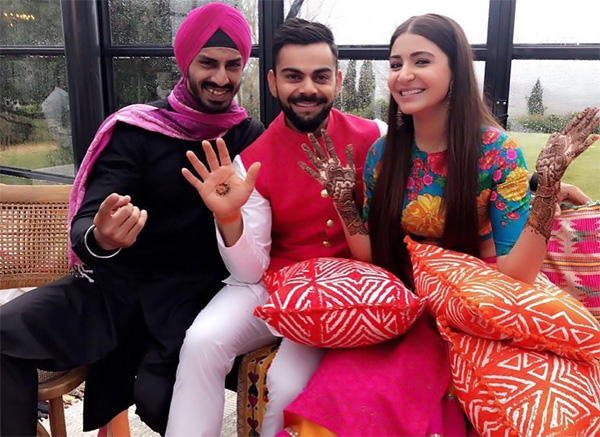 The newly weds tied the knot in Italy, and plan to hold receptions in Delhi and Mumbai as well. The couple will also be moving together in a villa in Mumbai after their receptions.

In the aftermath of their engagement and wedding, a video emerged of Virat Kohli singing ‘Mere Mehboob Qayamat Hogi’ for his wife Anushka, and it is absolutely adorable.

Here is a soothing performance by @imVkohli at the #VirushkaWedding pic.twitter.com/IsNK3y1vdy

Soon after it had become official, Kohli wrote the following tweet, which has since become one of the most re-tweeted post by an Indian in Twitter history..

Today we have promised each other to be bound in love for ever. We are truly blessed to share the news with you.This beautiful day will be made more special with the love and support of our family of fans & well wishers. Thank you for being such an important part of our journey. pic.twitter.com/aobTUwMNAK

Here are some of the funny, romantic and adorable messages that have been posted for VIRUSHKA..

The only thing missing in Virat and Anushka’s wedding was Ranveer Singh singing ‘Channa Mereya’ for Anushka !!

Kids: Gets Married, plans a honeymoon.

Adults: Plans a honeymoon, gets married.

Legend: Gets Married at honeymoon location.#VirushkaWedding