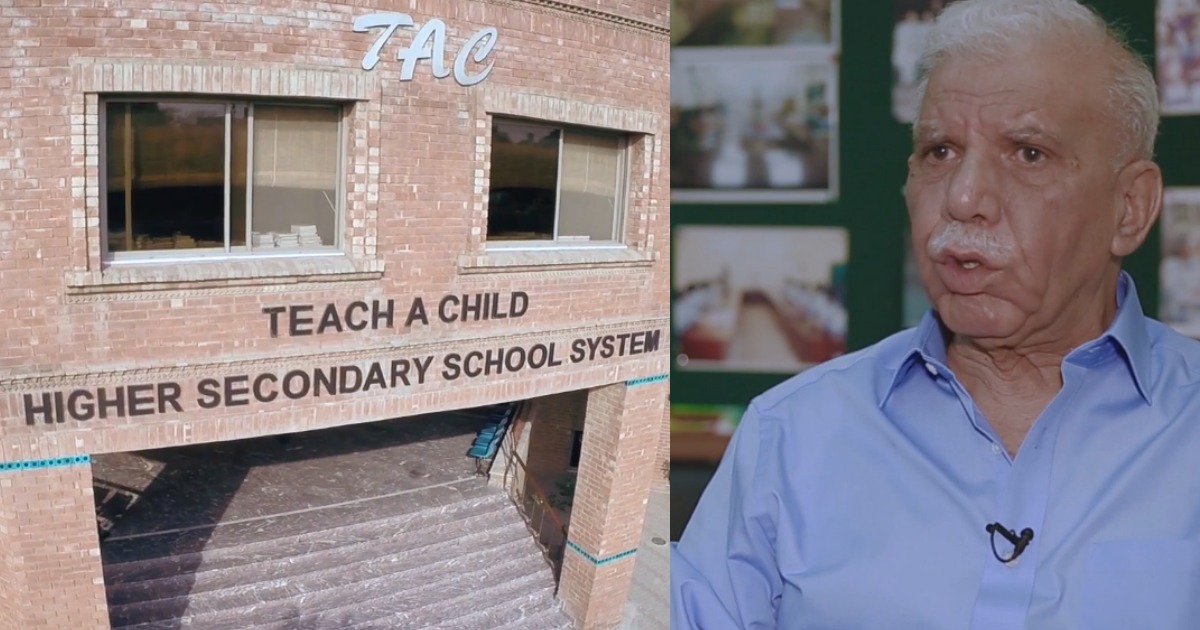 “I’m crazy”, exclaimed Lt. Gen.(Retd) Muhammad Maqbool, or General MAC as his graduates so endearingly call him and who we will refer to as General Sa’ab. “And I think there has to be a crazy element in you to keep going”.

Profound wisdom in the startling words of a man who worked professionally in the army for around 4 decades and more importantly, has a track record of 19 productive, stimulating and successful years post-retirement  spear-heading the “TAC” institute. With his gentle, pleasant and calm demeanor enhanced by his smart-casual look, the young, wide-eyed millennial audience in the LUMS auditorium was amused to see him brim with excitement and beam with pride each time he vividly recalled his challenges, accomplishments and most importantly, his students, all key constituents in his “TAC” journey.

Children from impoverished backgrounds are very sharp, have great street wisdom a strong instinct for survival.

One can hardly think of an emeritus army officer who would want to trade their leisurely peaceful, post-retirement life after a long tenure in the military and that too for a venture that is nothing less than a Herculean effort. But General Sa’ab was an odd man out, fuelled with passion: he arrived in Lahore from Rawalpindi only a day after his retirement and the very next morning, revved up his engines, and was up and about scouting a location for what was going to be first brick-and-mortar manifestation of his brainchild, his institute, “Teach a Child” or more commonly referred to as “TAC”.

The name of any institute becomes its face, its identity and with the passage of time, a legacy. “Our family got together to brainstorm the name when this idea was brewing in my mind. I told them that it [name] should be easy to remember, should carry a message, and be an acronym. We finally came up with “Teach A Child”, he recalled. There’s perhaps another reason why General Sa’ab set his finger on “TAC”: it is an abbreviation for “tactic”, which in military jargon is defined as the art of organizing and employing fighting forces on or near the battlefield. 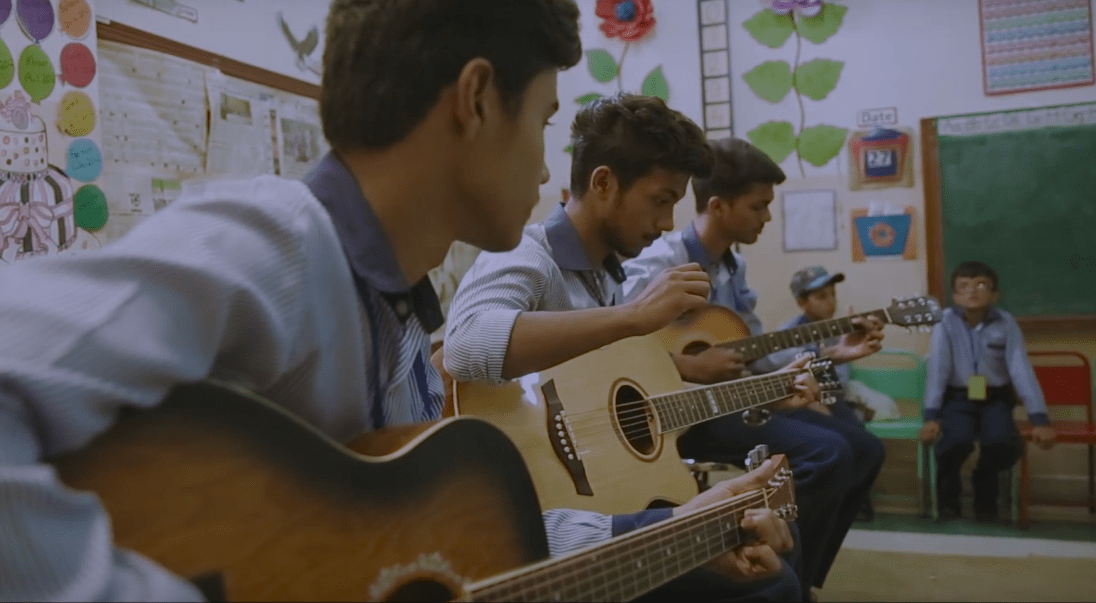 “Children from impoverished backgrounds are very sharp, have great street wisdom a strong instinct for survival”, he revealed. 19 years and an under-graduate batch later, the TAC ideology defined by him remains undisputedly unique and astute in harnessing the innate, unguided intelligence of these children. An “ideal” family is first identified by a thorough investigation of the family’s residence, source of income and education levels. Only those families which are non-progressive, have a lawful source of income and are willing to enable their child to become an architect of their good fortune are called to make one of their children undertake the SIT and VMI(Visual Motor Integration) tests. These tests assess the predisposed IQ of the children and only those falling on or above a mean merit are inducted in the school. This system works as a double edged sword: The extremely bright students from underprivileged backgrounds who otherwise risk falling prey to heinous evil and emerging as shrewd criminals, are enabled to channelize their energies and talents into constructive learning through high quality education; Indigent families can progress not only financially but also intellectually by joining hands with “TAC” to enable their children reach for the skies!

“The first batch was of 35 students…and in the first years, we inducted two kids from each family. But later we realized we will end up serving less families than we desire, so then we decided we better select one child from one family so that more can be benefitted”, he explained. In the board room of “TAC’s” purpose built campus in Johar Town, one can still see the bright faces of the first batch, reassuringly smiling back at the onlookers from a beautiful portrait.

While shedding light on the dignity fee worth Rs.5 that TAC charges from students, he stated that “Free lunch is a bad lunch…We want students to also appreciate the contributions of their parents because they are to work as a unit to progress. Even when they apply for universities, we will facilitate scholarships and even offer financial aid, but still leave a portion of the fee to be borne by the parents”.

Like many retired army officers, General Sa’ab also considered a job and a business start-up as post-retirement possibilities but his position at the National Defense Academy had familiarized and enlightened him with redundancies in the curriculum – though the one at the academy was guest speaker based- to such an extent that the experience served as the tipping point for him to take up and reform an educational ideology, that too for a higher cause. Even the refusal by UNICEF to fund his venture did not deter him: he decided to invest his government allocated 2 squares of land in Chishtian, Punjab along with some personal savings to catapult things in action. “I asked my wife if I can use the 2 portions of my pension for this new cause. Naively she agreed!”, he chuckled. His initial idea was to run the school on the donations from wealthy land-owners of the areas and educate the children of the farmers and other underprivileged families for free. Fortunately, a wise friend advised him to reconsider the school’s location in Lahore for proximity and hence, better operational control. 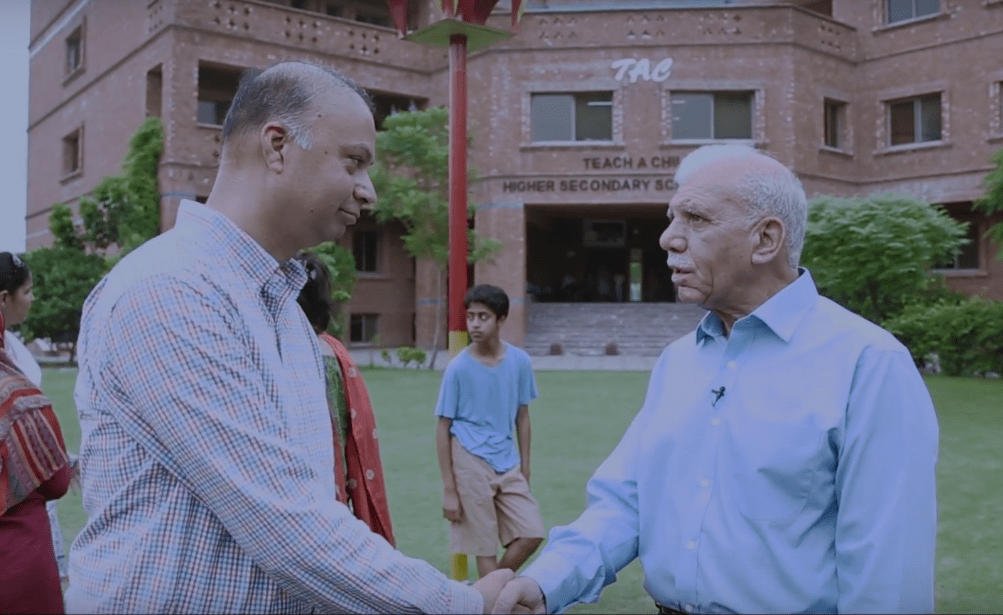 The impetus for the launch in September 1998 stemmed from 2 pressing concerns: the first being the gradual anxiety that is part and parcel of retirement. Interestingly, the second was armies “dine out” scheduled for 24th September, 1998 which was to be graced by the presence of important dignitaries such as General Pervez Musharraf and many other contemporaries of General Sa’ab, who were well aware of his intent and the developing idea of “TAC”. “I had a toll on me that if they question me about it [TAC], I should have a solid answer to give to them. And so, I was even more determined than before”.

The rest, as they say, is history. With the change of the school’s location to Lahore, audience dynamics also transformed, propelling him to visit innumerable private schools accompanied by his ever-loving and supportive wife, to gather information about modern education standards. He then drew inspiration from the Rs. 5 model of the Apna School in Rawalpindi and devised a proposition that was a marriage of high quality education at a very affordable price. Alas, the first “TAC” school opened its gates to a group of 7 students, in a single story rented house in Faisal Town, Lahore on 22nd September, 1998- and just two days later, General Sa’ab had a wonderful, heartened evening at the armies “dine out”.

“Then fate was kind and good things kept happening”, he gratefully exclaimed. The “TAC” ship set sail in full throttle, with a volunteering board of director’s and a professionally trained and compassionate teaching staff on board. The institute now has two campuses in Lahore, the main one located in Johar Town and another which opened in 2012 in D.H.A. The institute is still funded by General Sa’ab’s personal pension and by “Friends of TAC”, a group of donors that unfalteringly believe in his extra-ordinary vision. Discipline, focus and personal development have been instilled by him as the core values of TAC. He’s not your typical, teach-by-the-baton academic!  Students want to be around him like a sponge, soaking in all the wisdom and love that he is often seen compassionately sending their way.

Amongst other recent developments, a lateral entry program is in place following the institute’s status being upgraded to “college”, now called “TACIC” and now, other siblings of high achievers are allowed to get enrolled in the 11th grade. In the documentary that General Sa’ab shared during the interview, it was extremely heart-warming to witness the TAC program come full circle with its first pass-outs receiving accolades on completing their under-graduate degrees with flying colors from LUMS and LSE, amongst other prestigious Universities of Pakistan.

“It’s just a tiny drop in the ocean. We need many “TACs” to bring about a revolution”, he reflects, adding that the management is open to sharing the TAC practices with other NGOs and even other countries to replicate and even refine the model. Age may have led General Sa’ab to consider a succession plan but will there be anyone as “crazy” as him to take up the reins of the institute?

To volunteer, donate or for any queries, visit www.tac.edu.pk